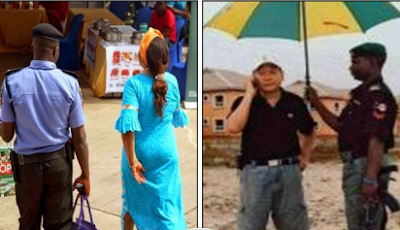 Almost two years after President Muhammadu Buhari’s order to the Inspector-General of Police to reduce the number of cops attached to dignitaries, the police authorities have not complied with the directive.

Our investigations have shown that policemen are still attached to dignitaries, private individuals and other public office holders at the detriment of the general public.

These police officers are permanently attached as escorts to these dignitaries, some serving as security details at offices, while other serve as guards at homes of the dignitaries.

In August 19, 2015, Buhari ordered the Inspector-General Solomon Arase to withdraw cops attached to dignitaries and redeploy them to regular police duties.

In a statement by his Special Adviser on Media and Publicity, Mr Femi Adesina, the president gave the directives at a meeting with officials of the Ministry of Police Affairs and the Police Service Commission at the Presidential Villa, Abuja.

Weeks long observations by our reporters show that the police authorities still deploy their officers in protection duties to well-to-do individuals and head of government agencies.

Some heads of federal agencies in Abuja are moving with an escort police car comprising of average of four armed police officers.

During the six weeks closure of the Nnamdi Azikiwe International Airport, Abuja and the routing of all flights to Kaduna airport, NE observed that individuals were having police escorts.

Checks at Maitama and Asokoro districts of Abuja revealed that policemen were seen providing security at residences of dignitaries not officially entitled to such privileges.

Even at social gatherings, policemen were seen holding bags of spouses of dignitaries, thereby questioning the efficiency of the implementation of the directive.